The Land of the Dragon

Nestled between the two giants of India and China, the tiny Kingdom of Bhutan covers an area of only 38,000 sqkm (roughly the size of the Netherlands) but whereas the Netherlands has a population of 17 million and welcomes 42 million visitors every year, Bhutan is substantially less crowded, with it’s population of 800,000 and only 250,000 annual visitors.
With only 3,000 UK visitors last year, Bhutan may be one of the best places on earth to visit if you prefer to go where there are less visitors from “back home”. 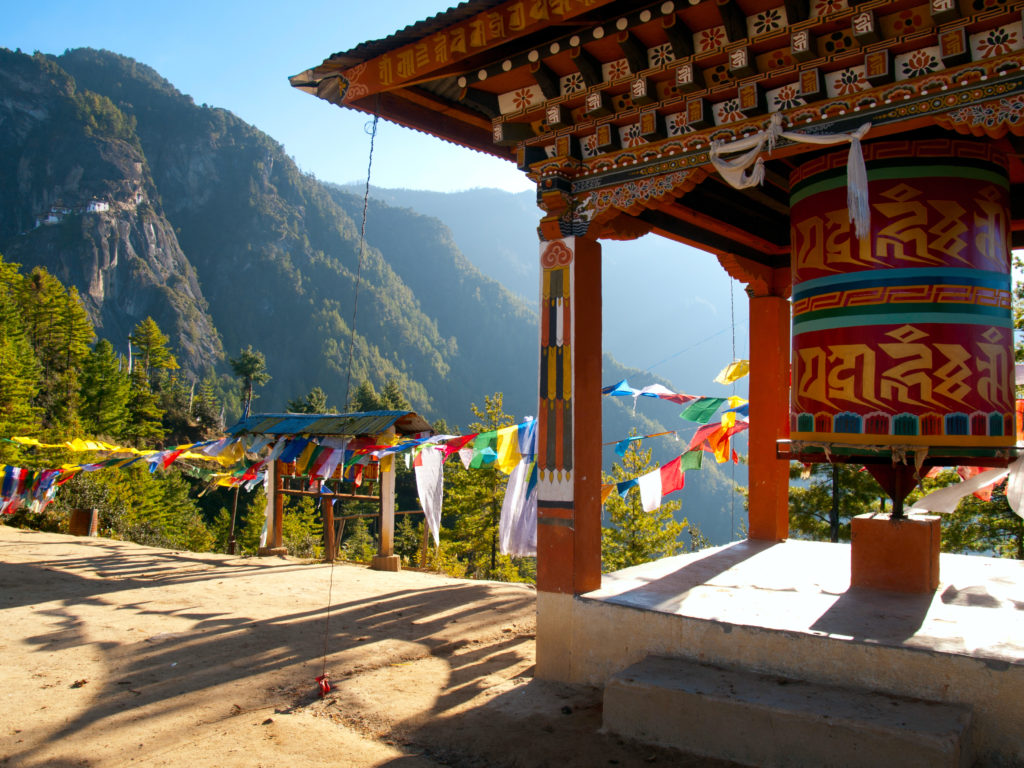 Despite being open to international tourists since 1974 (when it welcomed only 287 international visitors), the Bhutanese government is acutely aware of the environmental impact tourists can have on Bhutan’s unique and virtually unspoiled landscape and culture. As such, they restricted the level of tourism from the very beginning and today trips can only be booked via 75 licensed tour companies which operate in the country. All visitors have to travel on a planned, prepaid, guided tour or custom-designed travel-program and can’t travel independently within the kingdom.

This approach has led to Bhutan being acclaimed as one of the most responsibly managed tourism destinations on our planet. Put simply, when you visit, you can be assured that you will not negatively impact Bhutan’s culture, history or heritage in any way. 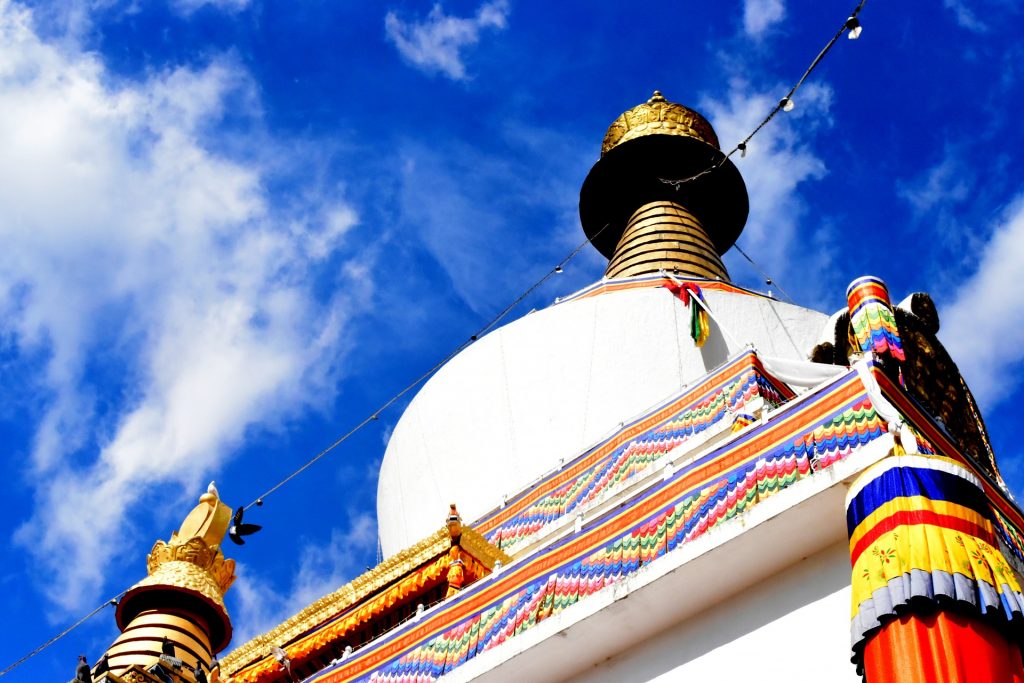 The World’s Most Dangerous Landing?

Getting to Bhutan is where the adventure starts for most people. It’s only international airport at Paro is widely considered to be one of the most challenging to both land and take off from with its elevation of 2,235m and surrounded by 5,000m Himalayan peaks. In fact, pilots are required to be specially trained in order to make the landing. Autopilot is never used and pilots land using a variety of landmarks to carefully measure their descent between the mountains. A BBC journalist joined a pilot in the cockpit of his Druk Air flight as he descended into Paro and it makes for an intriguing video: https://www.bbc.co.uk/programmes/p0299wq5

Bhutan has always been independent

Bhutan is one of only a few countries which have been independent throughout their history; never conquered, occupied, or governed by an outside power. Throughout time and according to all historical records, Bhutan has continuously and successfully defended its sovereignty. 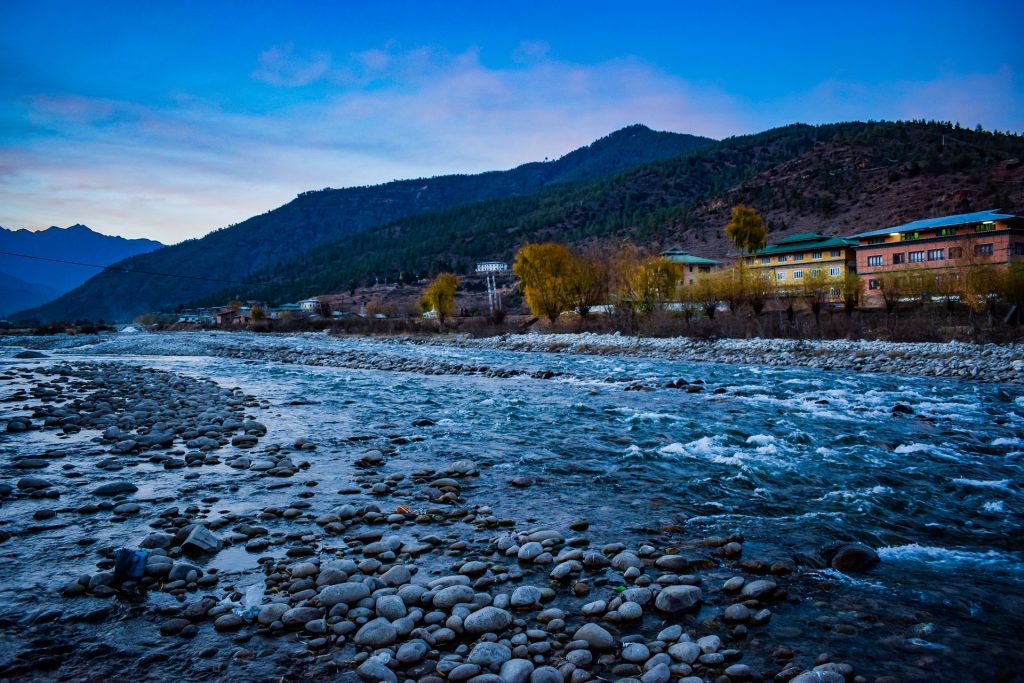 The King is revered with the utmost of respect

A hugely popular monarch, King Jigme Khesar Namgyel Wangchuck and his wife Queen Jetsun Pema regularly travel throughout their kingdom where they visit the schools, farms and businesses to meet with their subjects.  According to my friend in Bhutan, they also visit subjects in their homes and are welcomed to enjoy mealtimes together. 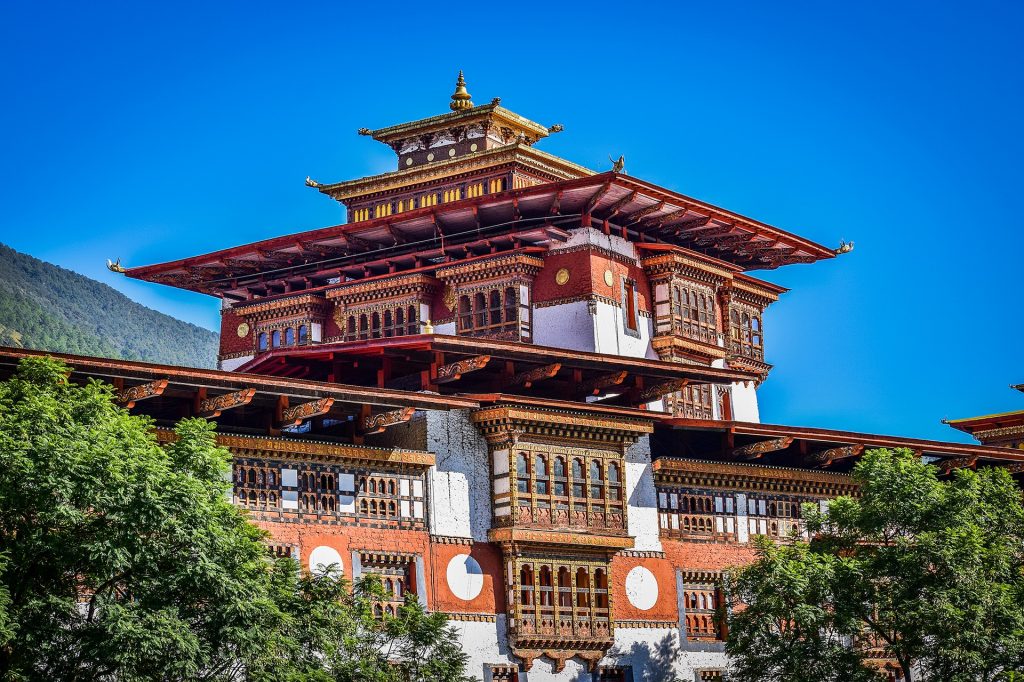 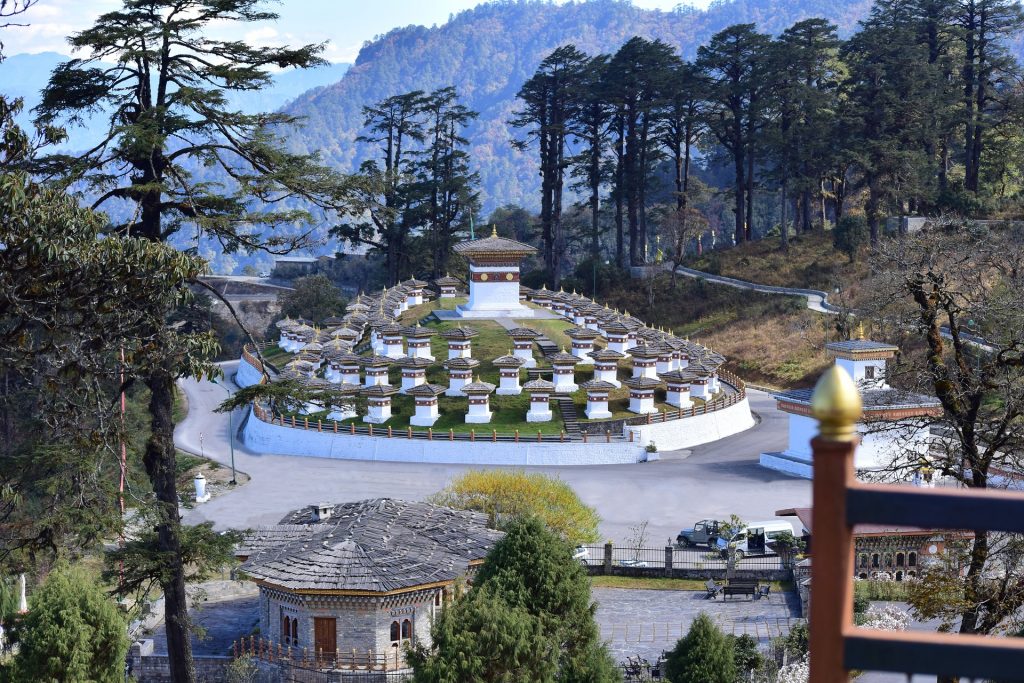 To gain an insight into why Bhutan is so very different from anywhere else in the world, it’s really important to understand the Gross National Happiness development philosophy of Bhutan.

Economists argue that happiness can be obtained with material development. However, Bhutan argues the case differently, believing that material growth does not necessarily lead to happiness. In Bhutan, progress is not measured by Gross Domestic Product but by Gross National Happiness.

The Late Druk (King) Gyalpo Jigme Dorji Wangchuck expressed his view on the goal of development as making “the people prosperous and happy.” The importance of “prosperity and happiness” was highlighted in the King’s address on the occasion of Bhutan’s admission to the United Nations in 1971. This vision was further enhanced by the Fourth Druk Gyalpo Jigme Singye Wangchuck who declared in the first years of his reign that “our country’s policy is to consolidate our sovereignty to achieve economic self-reliance, prosperity and happiness for our country and people.”

While the emphasis is placed on both, prosperity and happiness, it is happiness which is considered to be of greater significance. The Fourth Druk Gyalpo emphasized that for Bhutan “Gross National Happiness is more important than Gross National Product” and this is now being fleshed out by a wide range of professionals, scholars and agencies across the world. 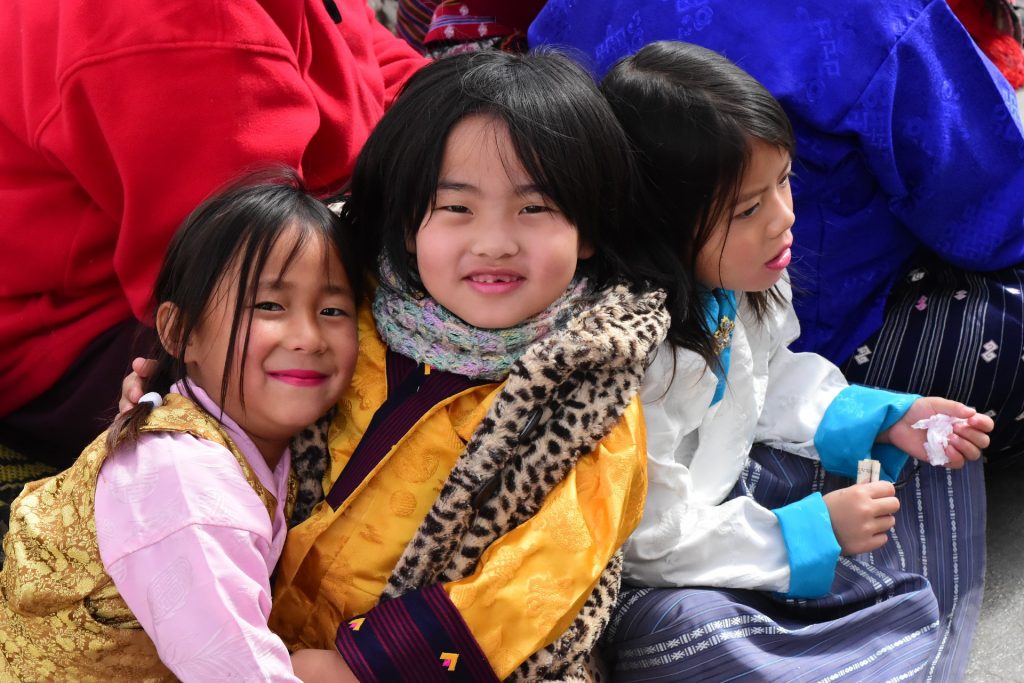 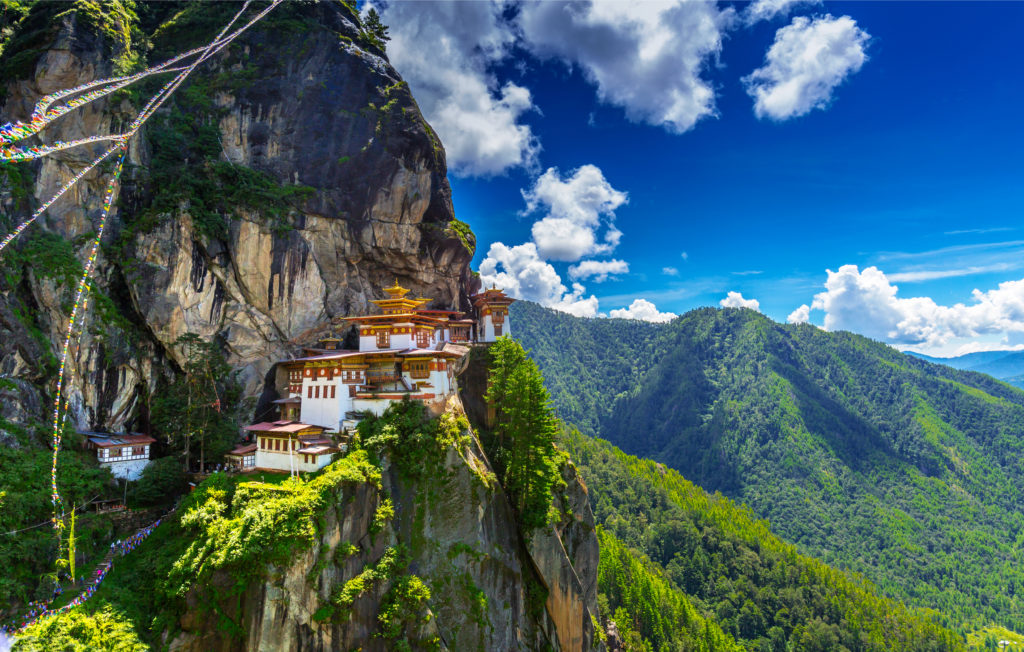 Concerned about the problems afflicting countries that focused only on economic growth, Bhutan’s King decided to make the nation’s priority it’s its G.N.H. (Gross National Happiness) rather than it’s GDP. He suggested that the progress of nations should be measured by “Gross National Happiness” as he had identified that the rich are not always happy while the happy generally consider themselves rich. While conventional development models stress economic growth as the ultimate objective, the concept of GNH is based on the premise that true development of human society takes place when material and spiritual development occur side by side to complement and reinforce each other.

As such, Gross National Happiness in Bhutan comprises of four pillars:

Today, the concept of GNH has travelled across the world to define prosperity in better terms and to measure actual well-being rather than consumption. The conventional concept of Gross National Product measures only the sum total of material production and exchange in any country. Thus, three major factors seem to be responsible for the expanding credibility of GNH.

There is wider awareness that GNP is a one-dimensional and thus misleading measure.
A wide range of indices have been devised which offer a more realistic assessment of even material prosperity.
There is growing pressure for an infusion of moral and cultural values into the core of economic policy.

GNH has allowed Bhutan to both expand its network of roads and increase its forest cover whilst in most other developing countries the arrival of roads is inevitably followed by deforestation. Bhutan’s move towards GNH has been highly successful. It has led to a “high value, low volume” tourism policy which has brought Bhutan significant revenue generation whilst simultaneously promoting and preserving both its cultural riches and traditional values.

Guided by its Gross National Happiness philosophy, Bhutan has welcomed economic development but not to the detriment of the Happiness of her people. This development philosophy has afforded the Bhutanese to live comfortable lives by embracing the middle path. Bhutan has increased both its forest cover (72% of Bhutan is forested) and diversity of flora and fauna whilst elsewhere many indigenous species are disappearing or are on the verge of extinction due to economic and industrial development. In the age of globalization, the Bhutanese spiritual, cultural and traditional values continue to influence the lives of the Bhutanese. The government strives to enhance self-reliance and reduce the gap between the rich and poor. Intensive efforts have been made to ensure good governance for it is the main source of progress and happiness.

You can learn more about this unique approach by visiting the Centre for Bhutan Gross National Happiness Studies here; www.bhutanstudies.org.bt 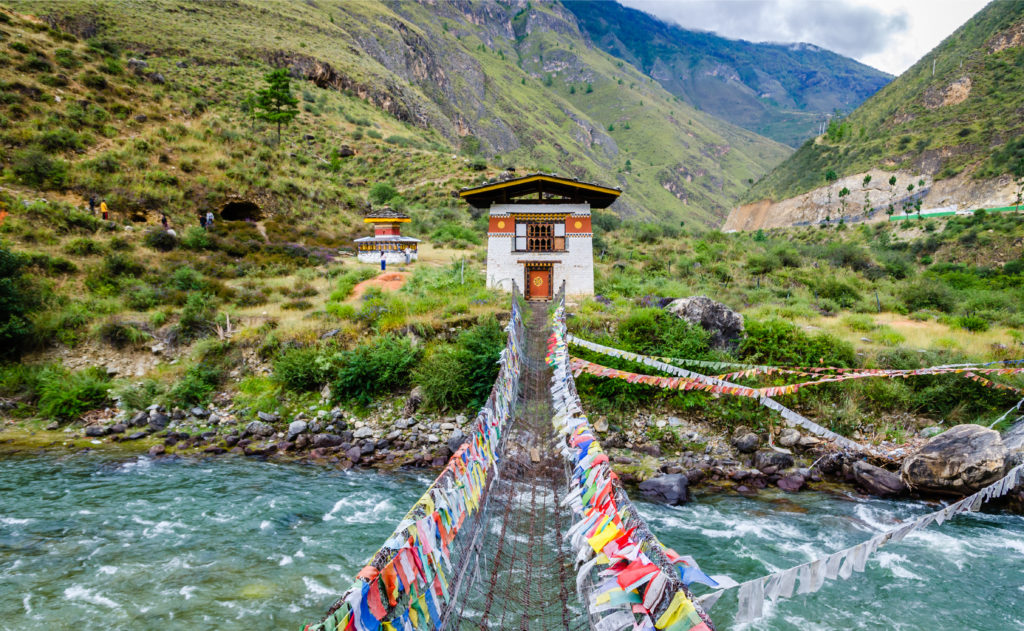 I recently met up with Mr Tenzin Yeshi (who runs an official tour operator in Bhutan) at ITB, the world’s largest travel and tourism industry gathering, in Berlin.  You can hear more fascinating insights on Bhutan, its people and its culture in our new Low Season Traveller Insider Guides podcast available now.  Enjoy!